Mega Man : Fully Charged  will be coming to Cartoon Network on August 5th to balance out your kids Sunday morning cartoons.  Also DHX has revealed that episode trailers will become available starting on July 21st on their YouTube based kids network WildBrain and will have it's own dedicated channel to Mega Man : Fully Charged content.  Also don't forget that we'll be getting a preview of the show tomorrow during the SDCC panel!

They've also revealed a bit more about the upcoming line of merchandise coming in 2019 for the new show and it is now known to include action figures, figurines, playsets, accessories, role-play items, and even Halloween costumes from JAKKS Pacific.


Here is the updated description of the cartoon from DHX Media :

Created for kids 6 to 11, and their parents who grew up loving the video games, Mega Man: Fully Charged features exciting new technologies and robots, and the introduction of Mega Man’s alter-ego, Aki Light, a normal, upbeat, schoolboy robot with nano-core technology that allows him to transform into the mega-powered hero Mega Man! With his Mega Buster arm cannon and iconic helmet, Mega Man battles the wickedest villains Silicon City has to offer. Beloved characters, such as Mega Man’s robotic dog, Rush, will return – while new characters, like Mega Mini™ and Suna Light, will make their debut! 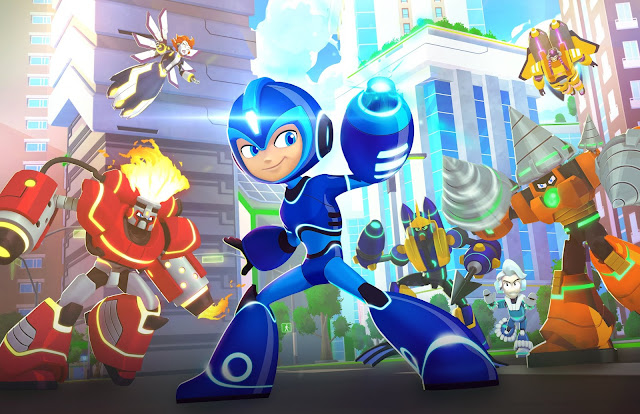 For the full press release from DHX Media click the link below :
https://www.dhxmedia.com/newsreleases/mega-man-fully-charged-blasting-onto-screens-this-summer/
at 8:10 AM