One of the biggest complaints I've heard about the new cartoon so far is that it's been restricted to the U.S. only.  Well coming September 8th the show will debut in Canada on CHRGD!  They quietly slipped the show onto their schedule and added it to their show lineup (if you search for it.) 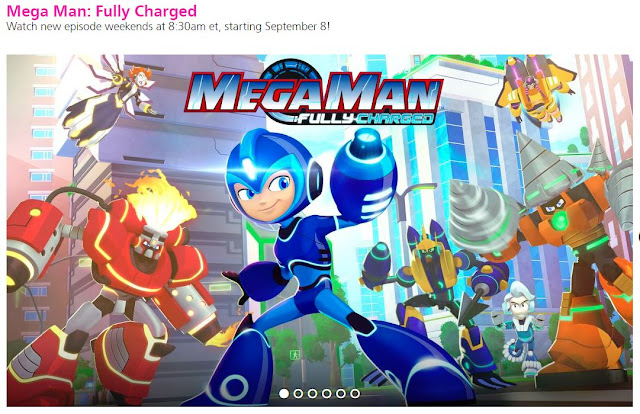 Here's also what their site has to describe the title :

For years, robots and humans have lived peacefully side by side in the futuristic world of Silicon City. However, there are those who want to destroy the balance and believe that man and machine were never meant to coexist! Luckily, Silicon City has a protector: Aki Light; a regular schoolboy robot with a secret… Deep within his programming lie protocols that can transform him into the powerful hero, Mega Man! He is equipped with an unbreakable armor, a Mega Buster arm cannon and his sidekick bot named Mega Mini.
Fully-charged adventures await as Mega Man goes head-to-head with the Robot Masters to protect the citizens of Silicon City. With his family at his side – his father and inventor, Dr. Light; human sister, Suna; and robo-pup Rush – Aki needs to learn to balance regular robot life with his responsibilities as superhero. It’s time to get Meganized!

Also for those of you who are watching the show, the titles and descriptions for episodes 11 through 18 have come out!  Check them out below.

Aki must set aside a petty rivalry with Bert Wily in order to stop Chemistry Man from wreaking havoc at Silicon Central's Field Day.

Fire Man and Wave Man team up to evaporate the city's water supply, forcing Mega Man to team up with an ally of his own-Suna.

When Ice Man decides to be a hero, Mega Man, influenced by Ice Man's literalness, steps down from the hero biz until a true crisis snaps him out of it.

Guts Man tries to undo Dr. Light's eco-friendly disposal of trash in Silicon City by infiltrating the family and destroying the Lighthouse so he can eat it!

After replicating Elec Man's powers, an underslept/overcharged Mega Man goes on a 24/7 hero spree that ends up turning him into his own worst enemy.

Mega Man teams up with his crush, Ashley Adderley, to solve a series of science riddles left by Chemical Man, who's plotting to turn all the city's metal into rubber.

Mega Man accidentally awakens Wood Man, who thinks it's still the Hard Age, sets off on a path of destruction toward Silicon City.